The History of the Killarney Jaunting Cars 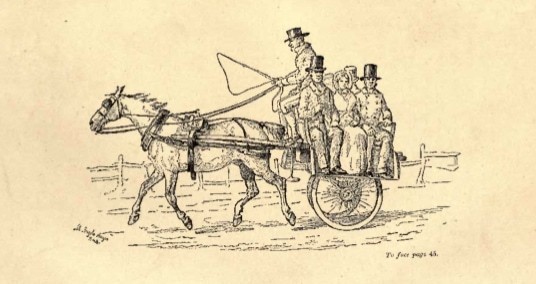 The age-old tradition of the Horse-Drawn Carriage as a method of public transport was first introduced to Ireland in 1815 by an Italian Irish Entrepreneur named Charles Bianconi.

The Bianconi Coaches, as they were known, served as the very first regular public transport service to Ireland, preceding railways services. The very first route from Clonmel to Cahir took passengers two hours to complete compared with a previous eight-hour boat ride and cost one penny farthing a mile. The services ran until the 1850’s and later, by which time there were a number of railways routes available nationwide.

Mr. Bianconi also owned a series of Inns, some of which are still in survival today, including one in Killorglin, Co. Kerry.

1861 is a year that will be forever famous in the town of Killarney as it is widely remembered as the year that Queen Victoria came to visit. Although the Queen and her royal gentry arrived in Killarney by train from Dublin, it was by a private Horse and Carriage that she visited Killarney’s most renowned beauty spots including Muckross Estate, (where she was a guest of the Herbert Family), Dinis Cottage, Muckross Abbey and of course Ross Castle and the Lakes of Killarney. There was no expense spared for this Royal visit with even a special boat, ‘The Royal Barge’ being purchased in London for the Royal’s Tour on the Lakes of Killarney.

Following the Queen’s visit, Killarney became a popular tourist destination owing to its well documented record of the royal stay in Irish & English newspapers as well as other leading publishing houses overseas.

Tourists from all over the world began to flock to the picturesque town, keen to experience the unique scenery of the location.

1865- The Dynasty Of The Tangney Family Begins 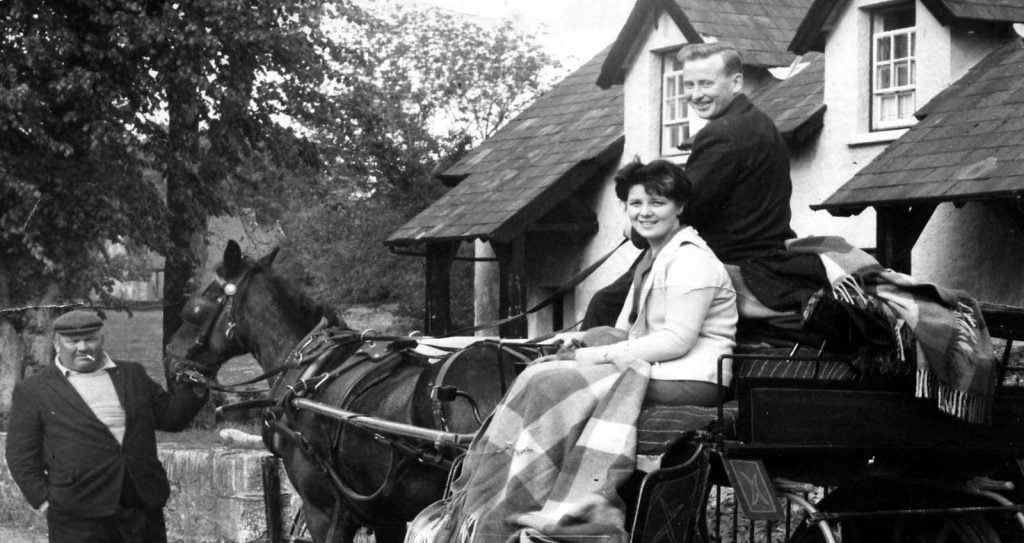 By the mid 1860’s, the horse drawn carriage was a popular method of transport in Killarney, and fast becoming a commercial entity in its own right, with the locals ferrying tourists to and from the destination’s most loved scenic locations. The Tangney Family were on the “band wagon”, they were at the grass roots of the Jaunting Car business beginning in Killarney.

In the high valleys of the Gap of Dunloe, the Pony Men operated the lighter Pony & Trap, a Tub Trap while on the lower lying grounds of Killarney Town and the National Park, the Jarveys drove the Jaunting Car or Side Car, traditions and terminology that are still highly regarded to this very day.

The traditional Jaunting Car consisted of two seats for two people on either side, the drivers box seat, and a seat behind him with a view to the road behind. The well, a deep space in the middle of the car, stored the oats bag. When the Jarvey had no passengers, the two hinged seats would be drawn up. 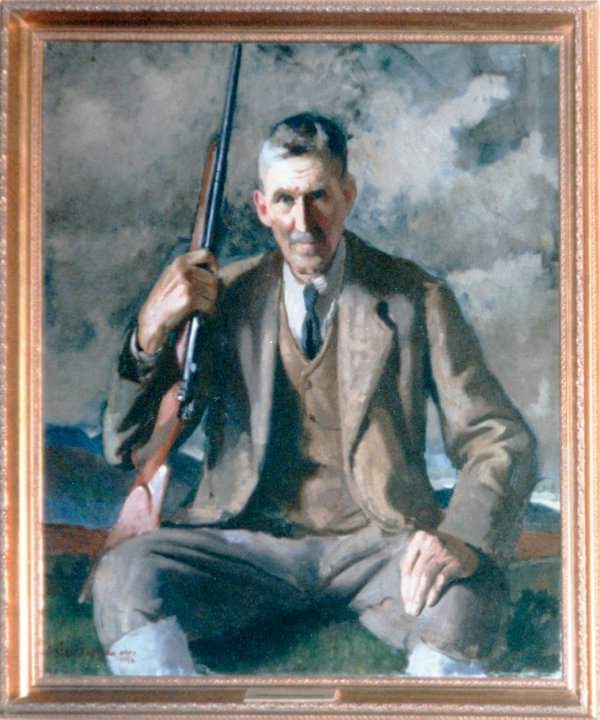 The history of the Park runs deep within the family tree, first starting with Eugene Tangney who was employed as Head Game Keeper in the Muckross Estate.

At the time, Muckross House & Estate was purchased for £50,000 by William Bowers Bourn II family, an American multi-millionaire whose wealth source came from ownership of the Empire Gold Mine, Grass Valley, California as well as ownership of the Spring Valley Water Company which controlled the water supply to the city of San Francisco. He purchased it as a wedding gift for his daughter and her husband, Maud Bourn & Vincent Arthur.

An expert Fisherman & Hunter, Eugene was also given the job of driving the estate’s Horse and Carriage for its many guests. To this day, Eugene’s portrait hangs in Muckross House which is visited by thousands of visitors to Killarney each year. 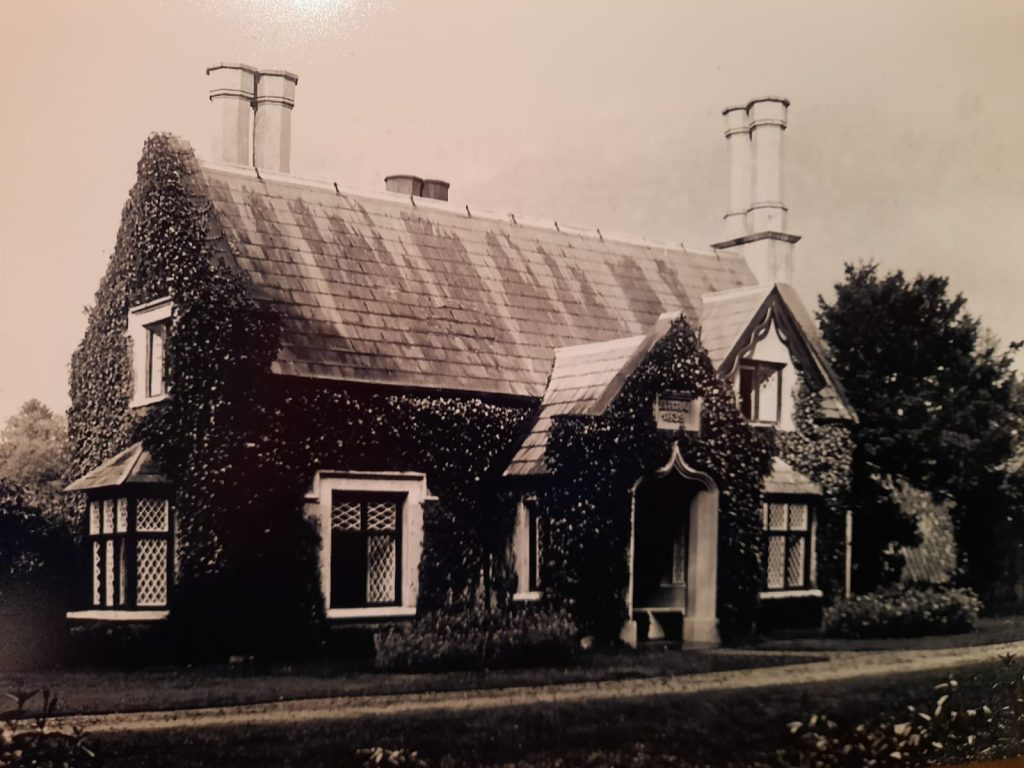 Dan Tangney was next in the long line of Tangneys to grow the family’s foundation within the Jaunting Car trade.

Born in 1908,  he married Sheila Casey of the Black Valley and had 8 children. His main employment like Eugene was as a Game Keeper with the National Park, based in Kenmare Estate, then owned by The Grosvenor family.

As Head Gamekeeper, he was given a residence within the National Park in Reen house (built in 1839), where the future Michael Tangney Senior would grow up. As part of his Game Keeper duties, he welcomed many guests to the estate, driving them by Jaunting Car around the estate as well as hosting them on various hunting and fishing expeditions. In 1957 he had a working shooting accident and was unable to carry out his Game Keeper duties. It was around this time that he turned to the Jaunting Car business as his sole vocation. 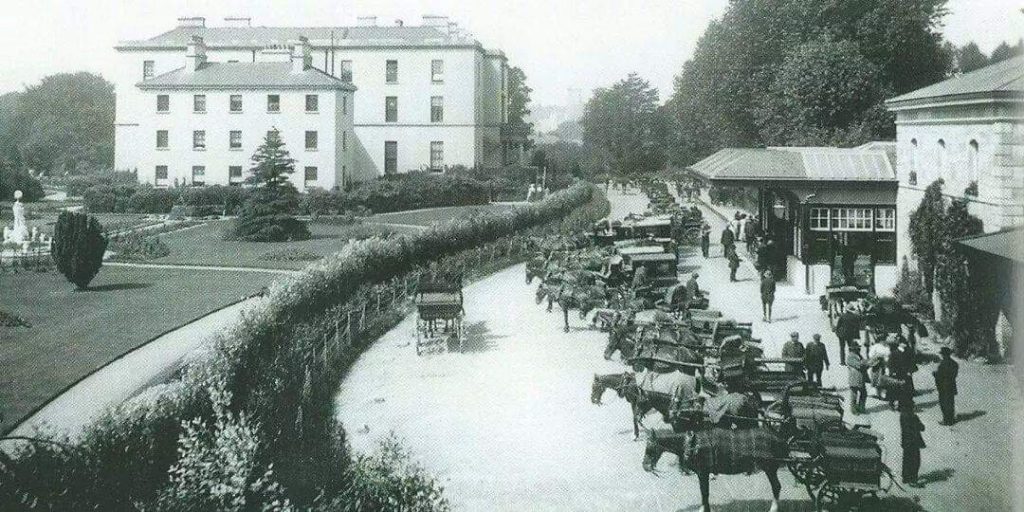 This era marked the influx of the Radio Trains which saw both national & international visitors flock to Killarney in their droves from the capital city of Dublin. These day return excursions, which initially arrived once a week, soon began arriving to Killarney three times a week due to their ever growing popularity and demand, with the trips taking place every Tuesday, Thursday and Saturday during the high season.

The genius concept, which coupled live radio shows on the train with a unique sight-seeing trip to the South West’s most alluring scenic destination, brought an increase of business to the town, which by now was well underway to becoming Ireland’s biggest tourism success story.

This decade also saw Michael Tangney Senior, son of Dan Tangney, purchase his first commercial Jaunting Car for £45.00 along with his 4 year old pony, Tom.  As well as the Radio Train, Michael’s main source of business was working closely with the local hotels by offering their guests a Jaunting Car pick-up service. Michael and his loyal pony, Tom were on hand to welcome the visitors and showcase the wonderful sights and sounds of Killarney on board his Jaunting Car. As business developed the routes began to change to cater for the increasing numbers, the most popular journey being Muckross & Dinis Cottage as well as the famous Ross Castle.

1970’s – The Jarvey, A Storyteller, A Comedian, A Companion And A Rogue 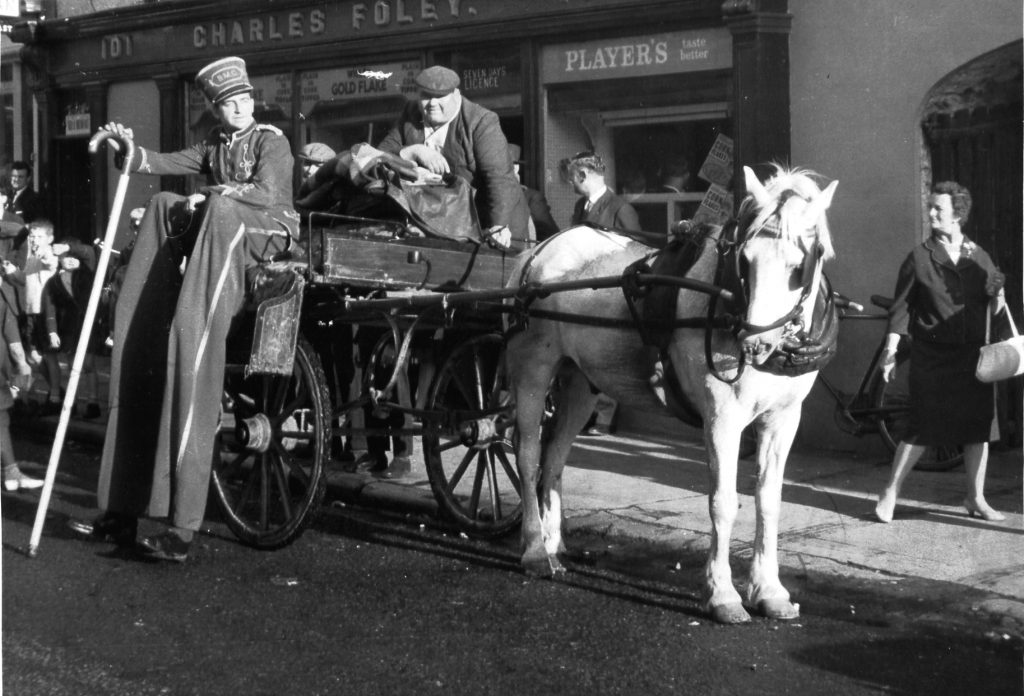 With the commerciality of the Jaunting Cars in Killarney continuing to thrive through the 1970’s and into the 1980’s, the popularity of the experience had proven itself as much part of the town’s present and future as it’s past.

Along with the well-trained horses, some of whom would even stop for a photo and move on after the click of the camera, many considered the Jarvey’s themselves the business’ secret ingredient for success. It was in this decade that many famous Jarveys such the late Whitty O’Sullivan, (the Singing Jarvey) came to the fore and served to highlight the fun-loving persona of the Jarvey, cementing their unique charm and character worldwide.  Jarvey’s today are known for their quick wit and vast array of local knowledge, their keen story-telling capabilities and charm, and of course their ability to captivate their next passenger at a drop of their peak cap.

1980’s – The Evolution Of The Traditional Jaunting Car 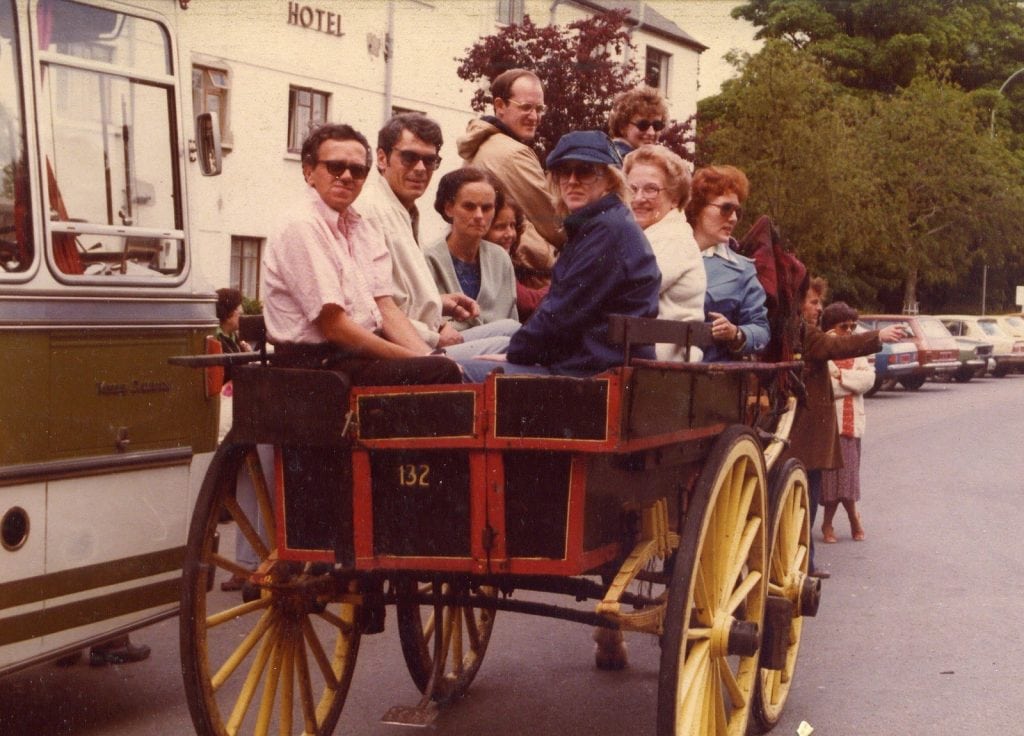 During this period, the traditional Jaunting Car, as it was known, underwent a complete transformation with the addition of two more wheels to allow the seating of extra passengers. The subsequent evolution of the customary two- wheel vehicle was motivated by greater demand in the tourism industry in Killarney, fueled by the growing influx of globetrotters to the town.

1985- The Next Generation Start To Take The Reins 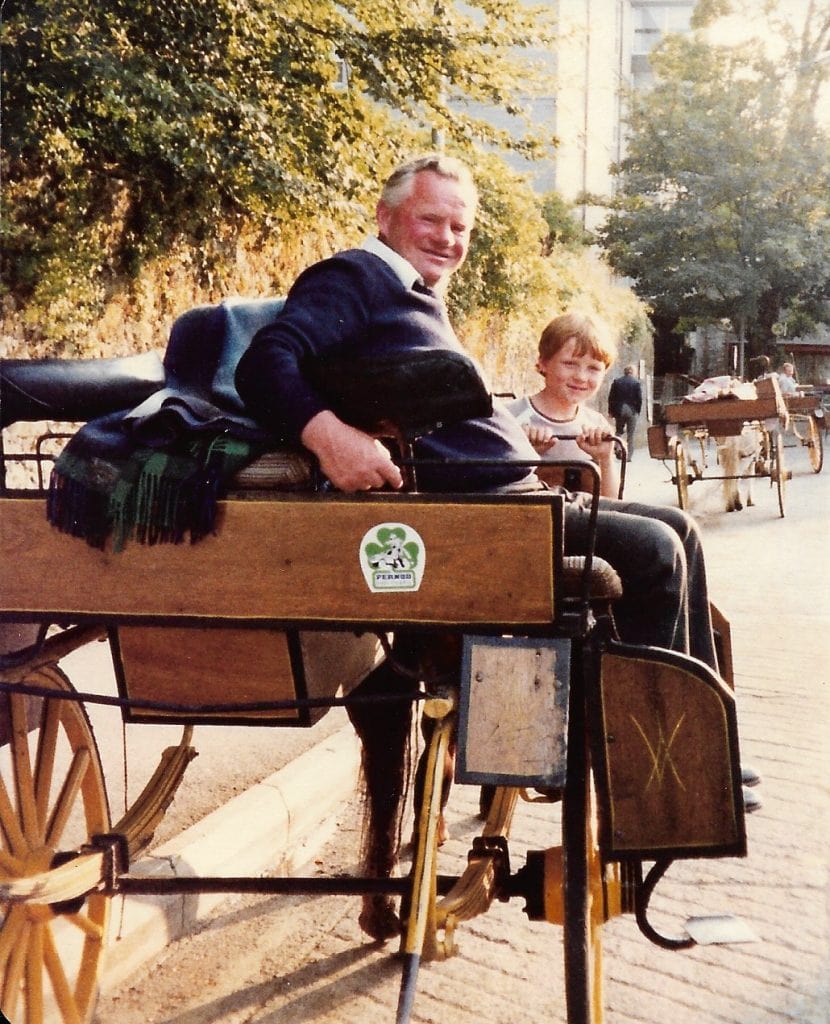 From a very early age, Paul, who was the eldest of Michael Tangney’s three children, was given a set of reins and encouraged to learn his father’s traits. Over the next few years Michael Senior and his son Paul would navigate the business and catapult it from a singular vehicle operation to an entire fleet of their own Jaunting Cars. The nature of the industry was changing rapidly and with the arrival of the English Coach Bus and international travellers, was now becoming a volume business.

2000’s-Killarney Jaunting Cars, A Journey of Tradition, A Tradition of Excellence 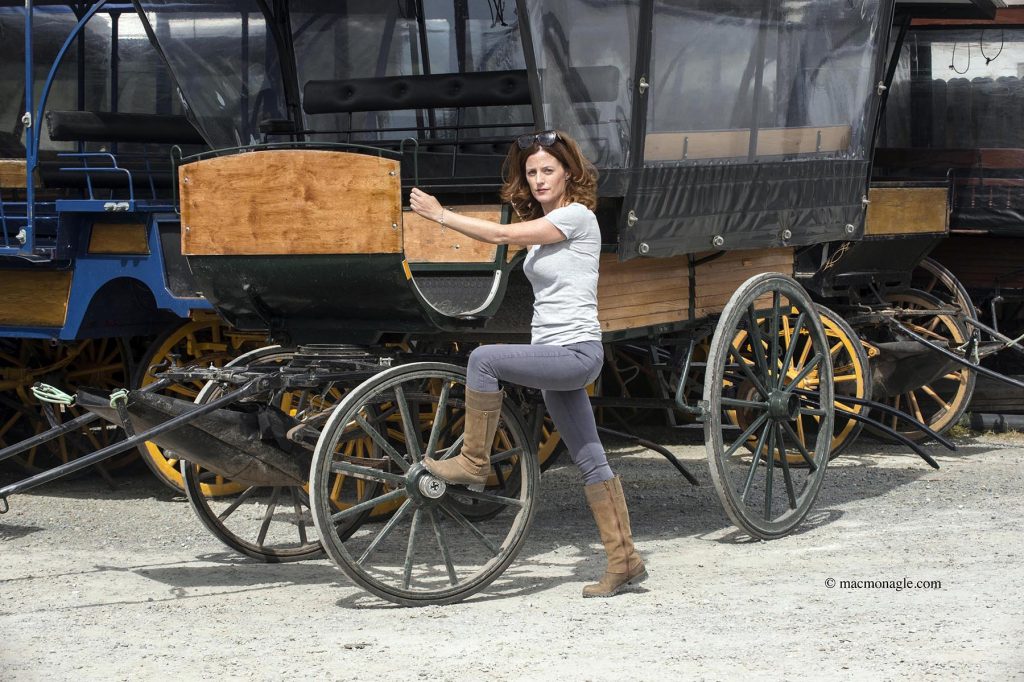 Laura, Michael’s only daughter also grew up in the business, working alongside her father and learning as she went along. On completion of her education, Laura returned back into the family business. Now that Michael Senior & Paul had provided a strong and firm foundation to the business, Laura brought a different aspect and approach which would help to take it to the next level. Michael Junior was soon to join the family enterprise and his new generation ideas and work ethic too enhanced the overall product offering. The company and the product began to evolve.

In 2010, the Jaunting Car, underwent a further progression when a roof was added to the carriage to protect passengers from the elements and thus improve the overall experience. Now the tour became a weather-proof trip, allowing the seasonality of the business to be extended. Killarney Jaunting Cars had become an all year-round attraction. 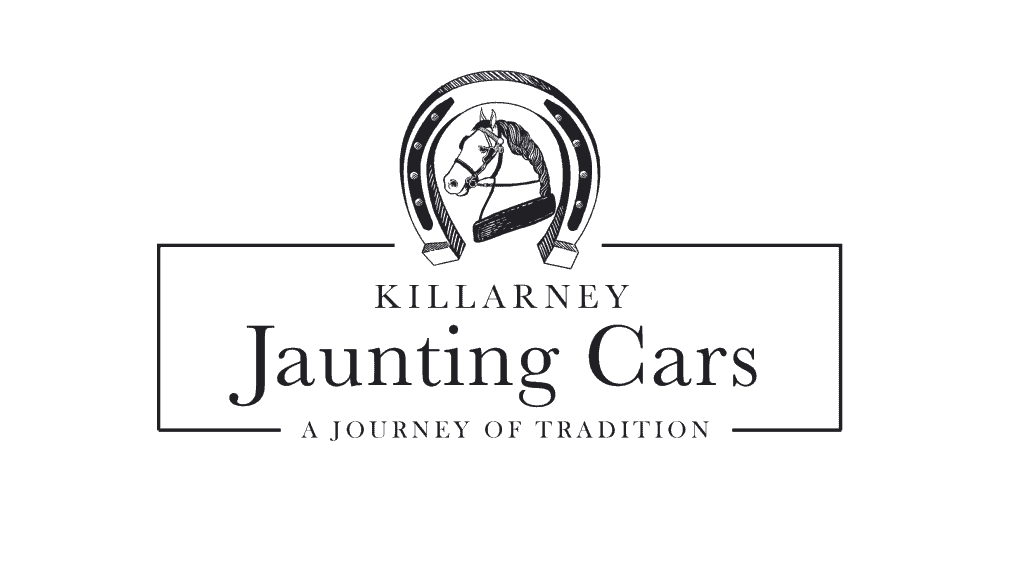 From its inception, Killarney Jaunting Cars Ltd. is now fully operated by the younger generation, Laura, Paul and Michael Tangney Junior. Hospitality is in their veins.

Over the years, the company have expanded considerably to offer not only Jaunts to Killarney’s favourite locations but also additional experiences such as a traditional Pony & Tray Ride to the Gap of Dunloe, a Lake Cruise on the Lakes of Killarney, and a firm family favourite, the Killarney Christmas Sleighs, amongst others.

The Tangney Family aim to provide their guests with traditional and authentic Irish experiences, coupled with a unique and informative insight into Killarney and its famous National Park. Killarney Jaunting Cars is regarded as one of the leading Tour Companies in Ireland.  The Tangney Family take pride in keeping the personal touch of an Irish family run business.