Renowned for its breath-taking beauty, glorious lakes and majestic mountains, it’s no wonder that the Killarney National Park, a UNESCO Biosphere Reserve, with an extremely rare eco-system, plays home to a whole host of unique and protected wildlife. Here we introduce you to just some of our wild and wonderful neighbours…. 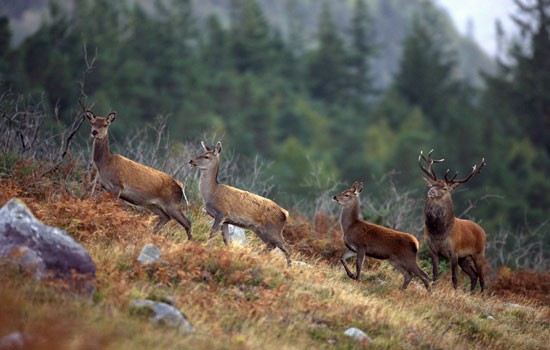 Killarney Valley is famously home to two historical species of deer, the native Red Deer as well as the Japanese Sika Deer.

The Red Deer, which are the last indigenous herd left in Ireland, are thought to have transcended from Neolithic times. The stag, which is the largest mammal on our shores is a dark brown russet colour with a paler rump patch and tail. His impressive antlers can weigh up to 15kg and are covered in soft velvet. Between March and April each year, the stag sheds its antlers which then begin a new growth process and are fully returned to their former glory by August. The female deer are called hinds and the young deer are called calves. 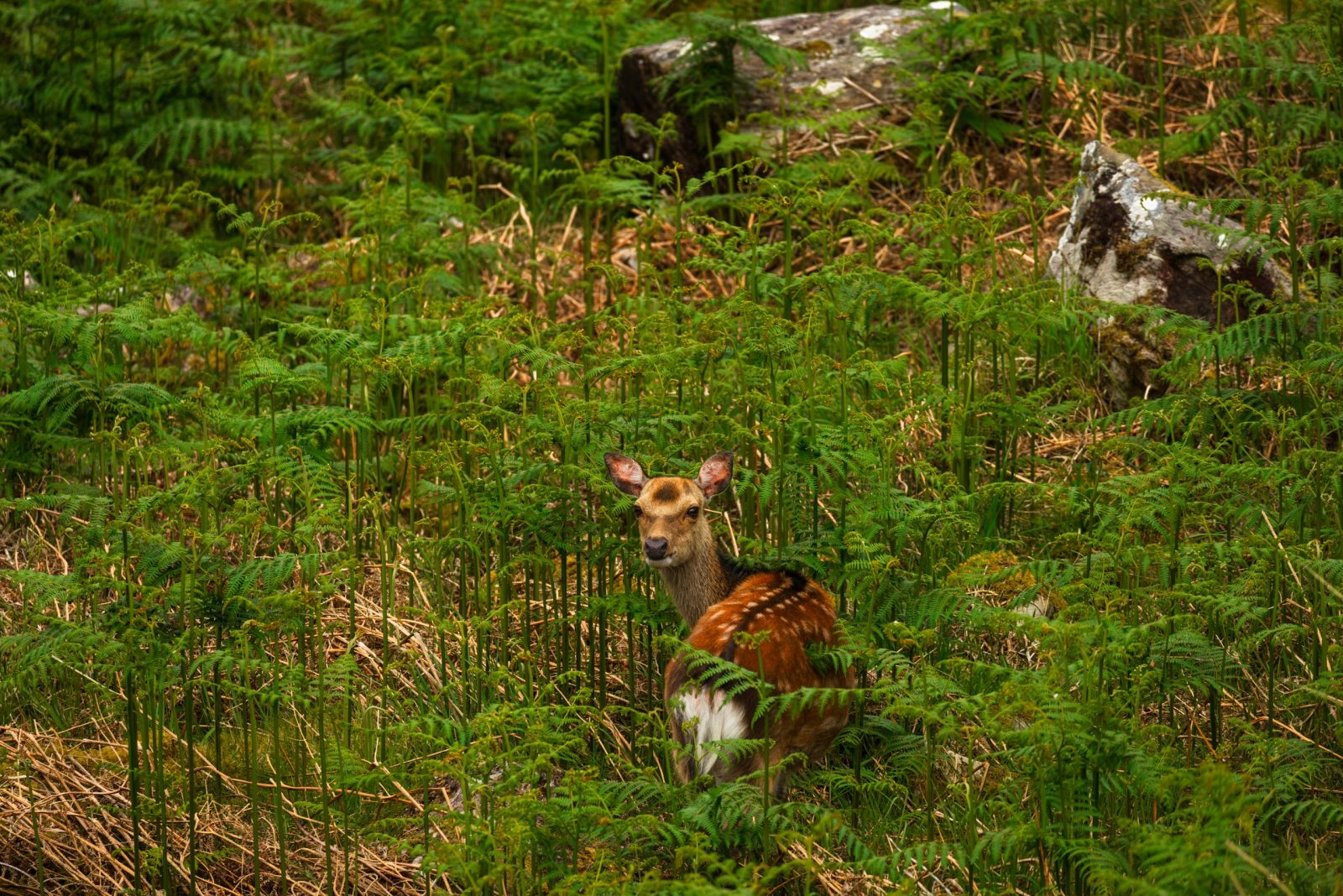 Introduced to Ireland about 150 years ago from Japan, the Sika Deer are much smaller in stature in comparison to the Red Deer. The stags have much smaller antlers and the deer’s coats are noticeably different, with a thin dark stripe dappled with white spots either side.

Both species of deer are herbivores and love to feed on leaves of trees, seedlings, rushes and grass and can be seen grazing in herds in the large Demense area of the Killarney National Park, from sunrise to sunset.

The elusive Pine Marten is one of Ireland’s rarest breeds with an estimated 2,700 individuals on the island of Ireland in total, however this little critter can often be spotted in Killarney’s Tomies Woods, one of Ireland’s very last natural Oak Forests.

The secretive species is roughly the size of a domestic cat with a rich dark brown fur and a white or yellowish patch on its throat as well as bright beady eyes. The Pine Marten is mainly active at night-time when it comes out to prey on other small mammals and birds, although he also likes to snack on meals of berries and other vegetation. 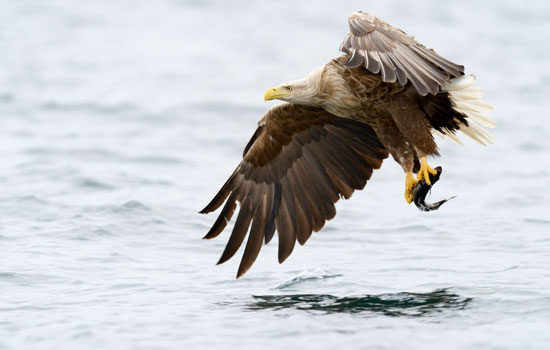 After nearly a century of extinction, the White Tailed Eagle was brought back to our shores by the Department of Culture, Heritage and Gaeltacht between 2007 and 2011, when 100 of these magnificent creatures were released here from Norway.

In 2020, this initiative was further bolstered by the introduction of 10 more young eagles to be dispersed at various locations on the island, including the Killarney National Park, to further enhance the breeding chances.

This impressive bird of prey, which has a wingspan of over 6 foot and a body length of over 1 metre, feeds on dead livestock as well as small mammals such as hares and seabirds. It also loves to dive for wild fish and can often be seen scanning the Lakes of Killarney as well as circling the skies over Eagles Nest on the Upper Lake near Lord Brandon’s Cottage. 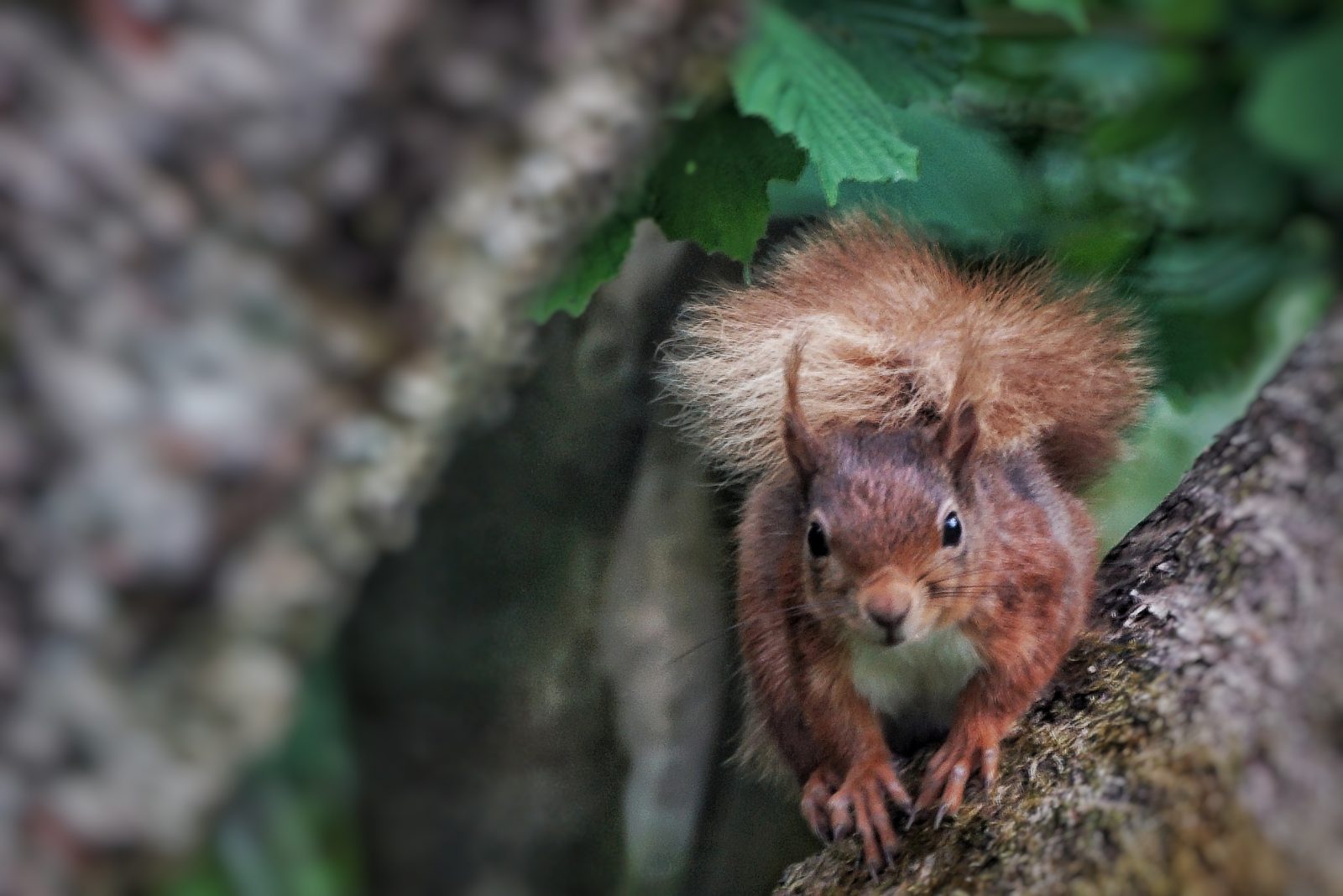 The Killarney National Park has long been acknowledged as a safe haven for our little bushy friend, the Red Squirrel. Although a native to the island, the Red Squirrel population has come under threat in the past decade by the Grey Squirrel, a breed introduced to Ireland around a 100 years ago.

The Red Squirrel is differentiated by its grey cousin in its smaller stature – almost half the size of the Grey Squirrel – its longer ear tufts and of course its beautiful reddish-brown colour.

However, the Red Squirrel is much harder to come across, choosing to spend the majority of its time forging amongst the tree-tops rather than hunting on the ground. A herbivorous rodent, this charismatic creature is completely reliant on its woodland to survive, mainly seeking its fruits, berries, seeds and nuts.

Although sightings are rare, the Muckross area of the Killarney National Park, that is plentiful in tall tree canopies, is one of the best sighting hotspots for this fellow, just remember to look up! 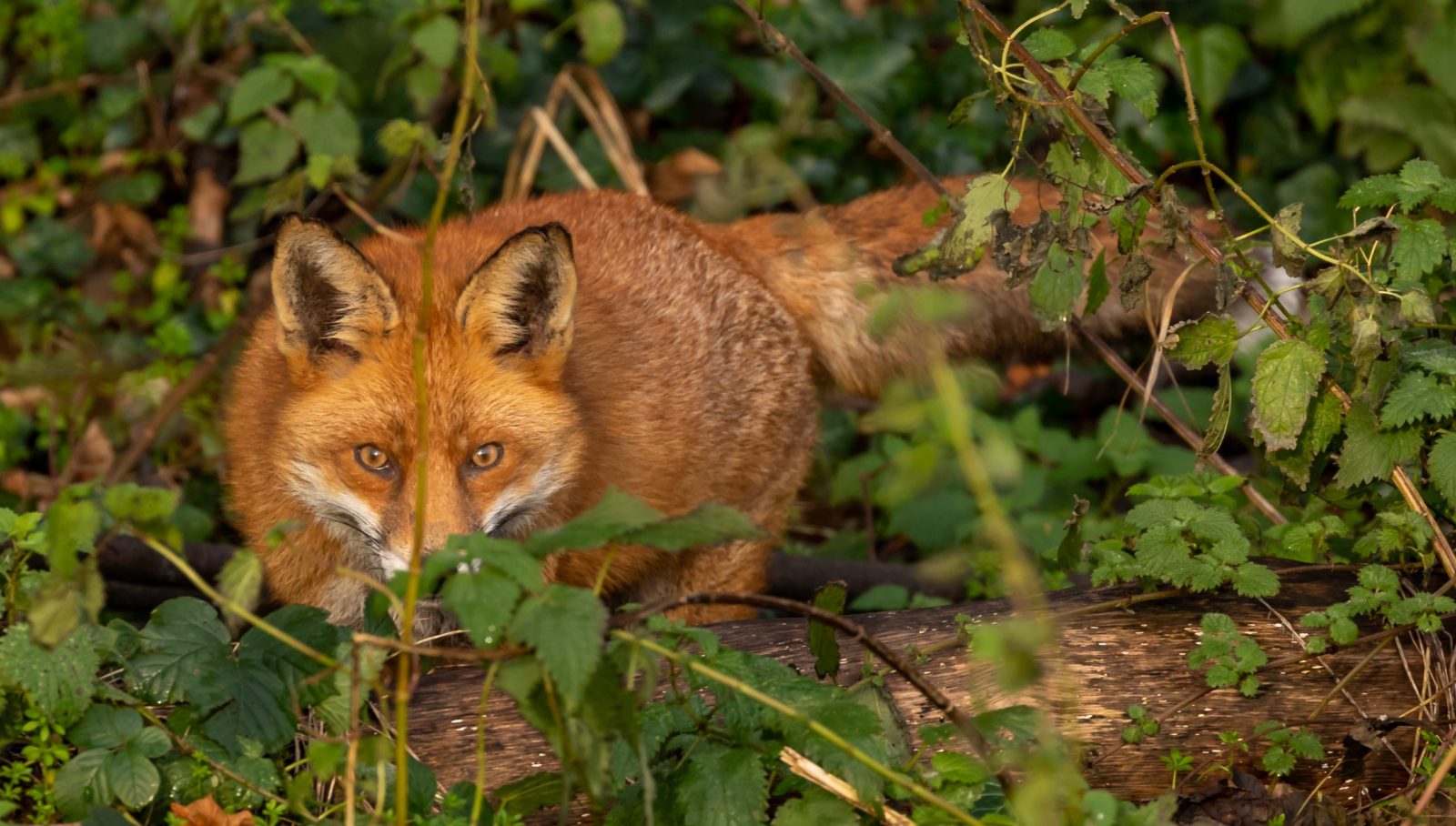 Perhaps one of the easily recognisable of mammals is the Irish Red Fox owing to its dog like appearance and red bushy horizontal tail.

A highly adaptable and versatile omnivore, the Irish Red Fox is a solidary hunter with a varying appetite, allowing it to survive in a wide range of different environments. He forages from dusk to dawn and feeds on a range of fruit, berries and worms as well as dead livestock and small mammals such as rabbits and mice etc.

The Fox prefers a highly dense environment with an abundance of cover and shelter for his hunting excursions, as well as plenty of menu options, making the woodlands of Killarney National Park an ideal home for himself, his vixen and his cubs. 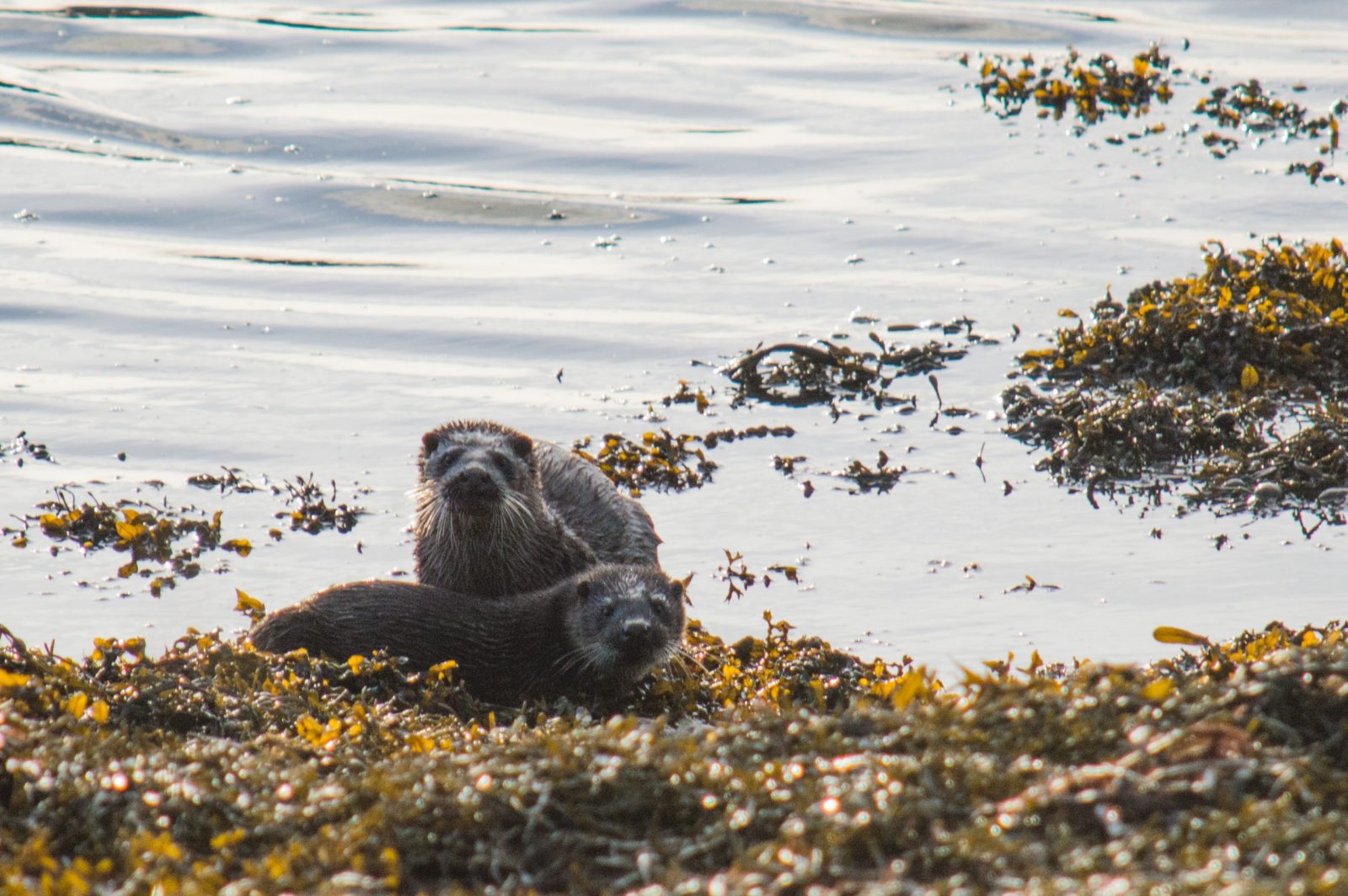 The Eurasian Otter, a semiaquatic mammal which can be often found in areas of the Killarney National Park, is also native to Ireland.

Regarded as one of Ireland’s most charismatic mammals, the Otter is another secretive species only allowing rare glimpses of himself in the wild. The Otter can be typically found in any aquatic location from small streams to large riverbanks and has also been known to hide away in holts or natural cervices which form in these areas.

Primarily a carnivore, the Otter hunts predominately for salmon or trout as well as other small fish along the coastal area. He is 2 to 6 feet long, has small ears and nose with a slender body. He has a topcoat of soft dense brown fur and a cream underlayer. The Otter is equipped with webbed feet and a strong tail which acts like a rudder, making him an adequate swimmer, as well as long whiskers, which are used to help him capture his prey in the water.

Similar to the Otter, the American Mink is also present in the Killarney National Park, having been introduced here in 1983.

The Killarney National Park is home to a wide variety of bird species but perhaps one of the most notable is the gregarious Greenland White Fronted Goose. In fact, over 50% of the world’s population of these geese find themselves on our shores during the Winter period.

This extraordinary species has been on conservation concern for many years, since decline in the 1950s. They are medium in size and grey in colour with a long orange yellow bill and are high-pitched and musical in their sound.

The Killarney flock of geese are the only bog-feeding geese of their type to winter in an entirely protected environment, where they feed on the wetlands and farmlands from mid- October to early April. In the Summer, they migrate back to Greenland where they breed, before getting ready to journey back to their second home of the Killarney National Park.

One of Kerry’s most popular tourist destinations, the Gap of Dunloe is one Killarney highlight that you will not want to miss. Formed twenty-five thousand years ago during Ireland’s last ice age, this glacial u-shaped valley which stretches 11 kil ...

The Muckross Traditional Farms are located on the Muckross Estate and offer an authentic outdoor interpretation of rural life in Kerry in the 1930’s and 40’s. Set on a real life farm, the experience invites visitors to discover what life was like ...

Situated amidst the cosmopolitan landscape of Killarney Town centre lies an oasis of calm in the form of the Killarney House and Gardens. The residence, which dates back to the 18th century was the former home of the McShain Family and the Earls o ...

Towering over Killarney Town, the medieval St. Mary’s Cathedral is one of Killarney’s oldest and most treasured pieces of architecture. Dating back to the 1840’s, the Cathedral, which was originally designed by famous English Architect, Agustus We ...

Famous for its tranquil beauty, it is difficult to imagine that the Lakes of Killarney were once the setting for mining enterprises at various times over the past four thousand years. Mined for copper, iron, and possibly lead and silver, these metal ...

Situated approximately 7 kilometres from Killarney Town and close to Muckross House on the N71, Torc Waterwall with its enchanting cascades and stunning views is a must visit destination when in Killarney. As well as being a mystical site to behold, ...

Some of the most impressive archaeological remains in Killarney date from early Christian times, and the most important of these is the ancient Monastery found on Innisfallen Island in Lough Léin. This Monastery was founded in the 7th century by St. ...

A visit to Killarney, or indeed Kerry, is not complete without a visit to the world renowned Muckross House & Gardens. One of Ireland’s most popular visitor attractions, Muckross House is a magnificent Victorian mansion and one of the count ...

Just a short 15-minute walk from Killarney Town, the stone fortress of Ross Castle sits majestically on the edge of Killarney’s Lower Lake. The ancient stronghold was built by the O’Donoghue Mór Clan in the 15th century and was believed t ...

Ladies View, about 12 miles from Killarney on the N71 towards Kenmare, is a scenic hotspot where you can catch the best views of the Lakes of Killarney, Derrycunnihy Oak Woods, the Eagles Nest and Torc Mountain as well as the Gap of Dunloe and the Ma ...